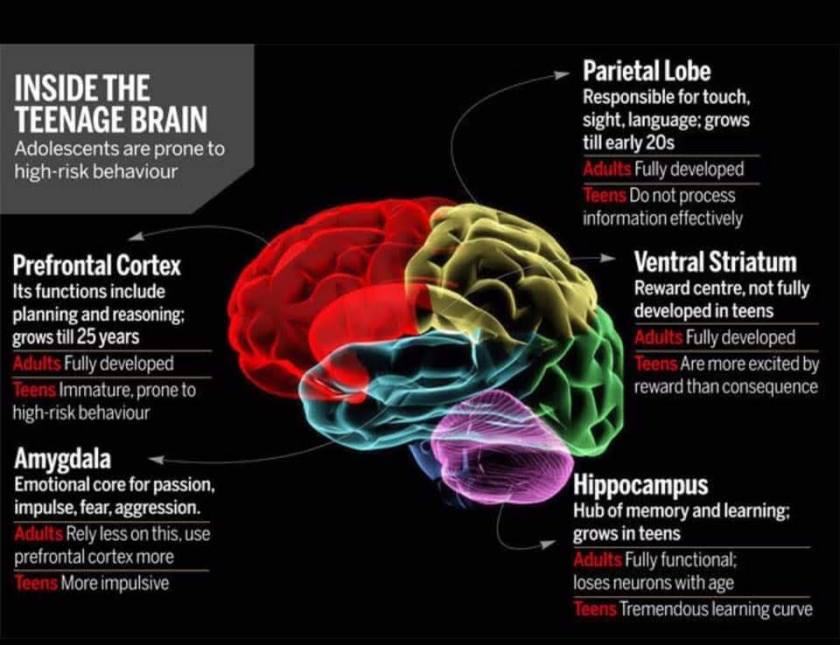 According to the University of Rochester Medical Center, It doesn’t matter how smart teens are or how well they scored on the SAT or ACT. Good judgment isn’t something they can excel in, at least not yet.

The rational part of a teen’s brain isn’t fully developed and won’t be until age 26. Adolescents are prone to at-risk behavior simply based on their brain development. The diagram below compares an adult and teenager’s brain.

In fact, recent research has found that adult and teen brains work differently. Adults think with the prefrontal cortex, the brain’s rational part. This is the part of the brain that responds to situations with good judgment and an awareness of long-term consequences. Teens process information with the amygdala. This is the emotional part.

In teen’s brains, the connections between the emotional part of the brain and the decision-making center are still developing—and not always at the same rate. That’s why when teens have overwhelming emotional input, they can’t explain later what they were thinking. They weren’t thinking as much as they were feeling.

What’s a parent to do?

You’re the most important role model your kids have. Sure, their friends are important to them, but the way you behave and fulfill your responsibilities will have a profound and long-lasting effect on your children.

It’s normal for teens to be down or out of sorts for a couple of days. But if you see a significant mood or behavioral change that lasts more than 2 weeks, it could mean something else is going on, such as depression.

If you think your teen could be depressed or struggling with mental health, promptly seek professional treatment for your child. Depression is serious and, if left untreated, can be life-threatening.

Teen need guidance, even though they may think they don’t. Understanding their development can help you support them in becoming independent, responsible adults.

Find out more about the Guidelines for Working with At-Risk Youth by checking this previous post.

This site uses Akismet to reduce spam. Learn how your comment data is processed.